Kaelthia, City of the Dragon's Hoard

Centered around the “Rock and a Hot Place” Academy and the adjoining temple complex, the capital city of Kaelthia is nestled against the mountains at the south eastern end of the grasslands that once formed the nation of Byssanthia. The Kaela River has its headwaters in the mountains and runs through the city.

About 10% of the population of the Council Lands (25,000 people) lives here, mostly humans and dwarves. High elves are present, but not common. Half-elves are rarer still. Halflings live in the surrounding farmland. Wood elves, and dragonborn are rare. Half-orcs generally are not welcomed within the city, but are not forbidden.

The city is set in a pocket canyon and enclosed on the open side by by two 30ft tall stone walls. Buildings in the wealthy areas and public buildings are dwarven stone work. Middle-class homes and shops are half-timbered and tend to be 2 stories tall. Poor buildings are wattle-and-daub construction. The city is quite spread out, with most groups of buildings surrounding a central communal garden.

The primary industries here are the mines and forge complexes on the outskirts of the city and the academy and temple complexes. The central council meets in a dedicated building near the academy. Farms cover the surrounding area outside the walls, run mainly by Halflings and humans.

Kaelthia is culturally a xenophobic and socially stratified. Humans and high elves hold all the positions of power and have established a “meritocratic” caste system based on aptitude tests. All those considered suitable for academic pursuits are removed from their families and enrolled at the Academy. Those who are identified as “wild talents” are shunned. Those with a divine connection are enrolled at the temple complex as acolytes. Choice of vocation is denied on general principle. Arranged marriages are common among the wealthier (or status seeking) clans. Public use of magic (arcane or divine) and public performances are restricted—non-academy graduates must purchase a 100gp revocable license. Unlicensed actions are punishable by exile.

Kaelthia gets its nickname from the brass dragon who nests in the mountains to the south-east of the city. She, along with her allies, was instrumental in saving the starving refugees from the final battle of the Cataclysm Wars. She still takes an interest in the safety of the city and the surrounding areas but does not get involved in politics. 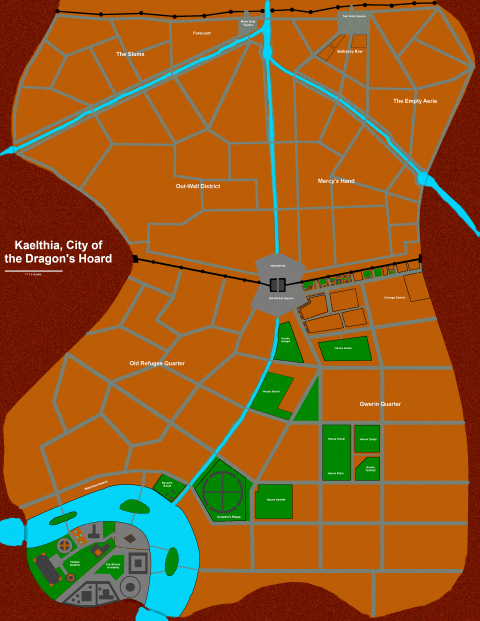